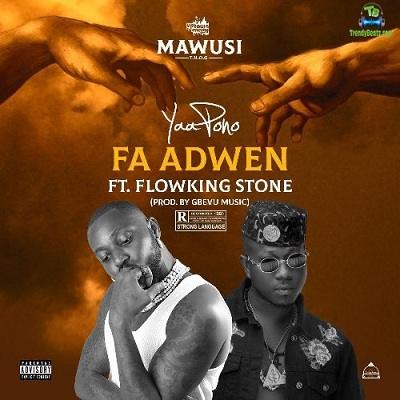 
Listen and Enjoy this amazing track tagged, Fa Adwen, written and composed by Yaa Pono, in which he features Ghanaian music crooner, Flowking Stone, to deliver an impressive verse, disclosed in the year 2022.

This Gbevu Music-produced track is really worth listening to. The two Ghanaian song makers, Yaa Pono & Flowking Stone gave in their possible best to ensure that this phenomenal soundtrack is a successful one.

Moreover, this enchanting record is Yaa Pono's first single for the year, after his album tagged, "Sovran", in 2021, which bagged nine solid and dope tracks featuring Lady J & Tee Rhymes.

Solomon Adu Antwi popularly known as Yaa Pono is a Ghanaian musician and performer, who blends with these elements highlife, hip-hop, dancehall and afrobeat rhythms. Known for his hit song, "Amen", 2013 which was a tribute to the famous afrobeat king Fela Anikulapo Kuti.