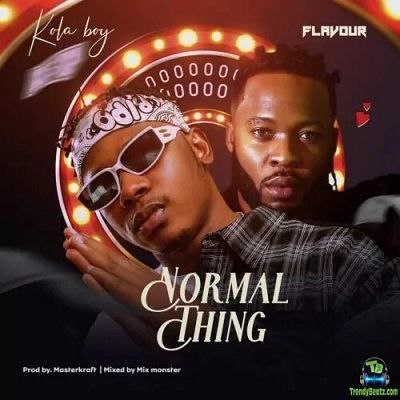 Gifted indigenous rapper and songsmith, Kolaboy put a smile on the faces of his audience with this studio number captioned, Normal Thing, featuring a well, respected lyrical genius from Nigeria called, Flavour, who added his best vocal to make the jam great.

Normal Thing is an amicable record you will cherish so much because the two Eastern song makers did justice to the catalogue, with production driven by one of the Nigerian illest music producers known as Masterkraft, who did a great job in the production department. Kolaboy linking up with Flavour is an excellent one.

However, the song is his second euphony for the year 2022 following, Brother Man, which features a fast-emerging indigenous rapper known as JeriQ.

Nwodo Chinonso 'Kolaboy' is known for his consistent and hard-working abilities, working hard to be at the top of his game in the Nigerian music terrain where there's so much competition and struggle. Having Mr. Flavour on this catalogue is an added advantage.


Share Kolaboy - Normal Thing ft Flavour Mp3 with others on;