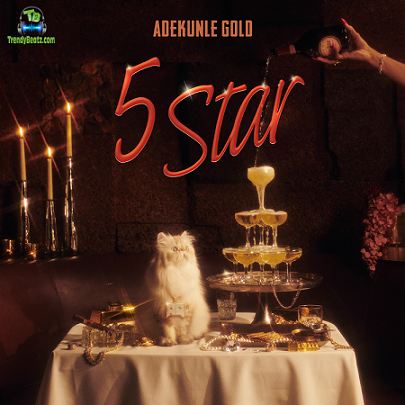 Adekunle Gold moves away from his, "Catch Me If You Can" album, to unveil this dazzling euphony tagged, 5 Star.

Well, respected music crooner, Adekunle Gold unravels this stunning harmony which he titles, 5 Star, following his album, "Catch Me If You Can", an impressive body of work which bagged a total number of fourteen outstanding euphonies, with vocal performance from brilliant music sensations.

Adekunle Gold uses the project, "Catch Me If You Can" to show off his growing versatility in a unique and experimental addition to his discography. This renowned music superstar has become a breakout star on the African music scene with his smooth, dance-ready take on highlife.

Recall, in the yea 2016 Adekunle Gold debut album, "Gold", reached No. 7 on Billboard’s World Albums chart. The impact was so massive that the album won two Nigerian Entertainment Awards: Best New Act and Best Song of the Year. AG Baby's music has captivated the young at heart.

The producer behind this exciting track was Kel P, who also has a way of making the best and most pleasant soundtracks when it comes to music production. Listen and download below.