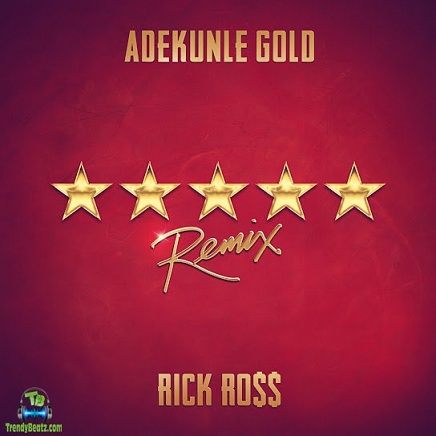 Professionally known as Adekunle Gold hit the studio once again with the remix of this entrancing record named, 5 Star. You have it below.

Famed Nigerian Afro-pop singer, Adekunle Almoruf Kosoko widely known as Adekunle Gold unveils the remix of his astonishing soundtrack captioned, 5 Star, and he linked up with one of the well, respected Amerian vocal wordsmith, Rick Ross, to make the euphony a reality, uncovered in the year 2022.

This Kel-P-produced record gets International rapper, Rick Ross switching flows and some vital punchlines. AG Baby from his own dimension came through with his sweet voice and enigma. The synergy between these two great music maestros yielded nothing less than a monster hit.

Adekunle Gold is one of the top-notch Nigerian music crooners, who has released numerous breathtaking singles and albums which made so much waves. You will agree with me that ever since AG Baby got married, he has really proved to be a better version of the man he was both in his music, behaviour and how he relates to others.

Have you been enjoying Adekunle Gold's euphonies since this year commenced? here comes another catalogue which is a remix of his jaw-dropping record named, 5 Star, having American music sensation known mononymously as Rick Ross, as a guest performer.