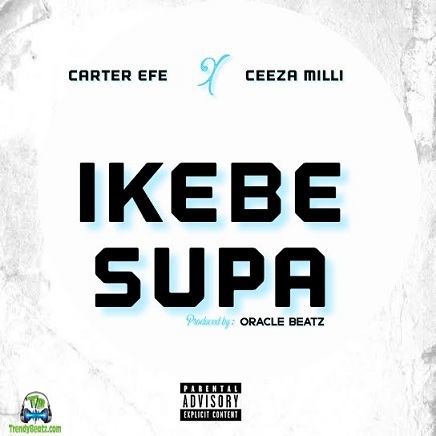 Carter Efe hit the studio once again with this banging tune named, Ikebe Supa, together with top trending Nigerian Afrobeat singer, Ceeza Milli, who gave a refined performance on the catalog, for the listening pleasure of their fans and the music community at large. It was in the year 2022 that this phenomenal soundtrack was disclosed for public consumption.

Ikebe Supa is a song you will cherish so much. Carter Efe and the popular songster, Ceeza Milli gave in their possible best to ensure that this masterpiece soundtrack, so fascinating and pleasing to the ears. Its production was handled by a hard-working and brilliant music producer known as Oracle Beatz, who did a great job in the production department.

However, this latest creative output follows-up after the Nigerian Instagram comedian, Carter Efe came into the music scene with his outstanding first installment, "Machala", together with Berri Tiga, a record he uses to support his love for Wizkid. The song topped Nigeria's Apple Music Charts and was gladly accepted by Wizkid FC and the music community at large.