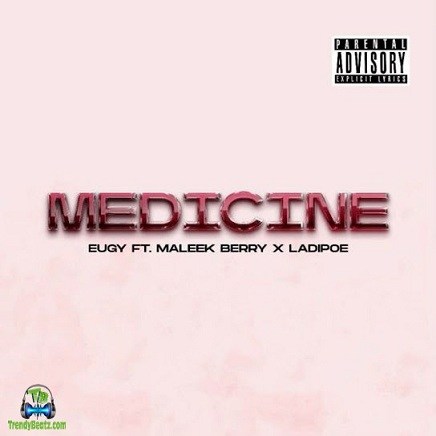 Eugy employs the service of Maleek Berry and LadiPoe to unleash this impressive soundtrack tagged, Medicine.


Professionally known as Eugy, a Ghanaian-British singer and songwriter unfolds this jaw-dropping soundtrack called, Medicine, British-Nigerian song maker, Maleek Berry alongside LadiPoe, for his audience to be updated with different sweet melodies.

This masterpiece output is a song you will cherish so much. The three music entertainers really gave in their possible best without anyone overpowering the other to ensure that this enchanting euphony is a remarkable one.

However, the latest remedy follows-up after Eugy's single tagged, No Other, which is still having good standard streams, downloads and views on various music stores. Medicine is another soundtrack that will buzz everywhere from the gifted singer.

Eugy officially known as Eugene Entsir is best known for his 2016 International hit single "Dance For Me" alongside Mr Eazi, which led to a 2017 MOBO Awards nomination

Eugy - Enough For Me

Eugy - Show Me The Light

Eugy - Show Me The Light (Video)

Smallgod ft. Eugy - I Go Give