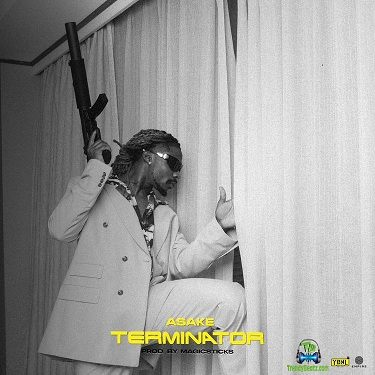 Ahead of his forthcoming album, Mr. Money With The Vibe, the Nigerian street-pop artist, Asake comes through with another jaw-dropping catalogue tagged, Terminator.


The newbie who incorporates Afro-street pop and fuji music, Asake update the playlist of his fast-growing fanbase with this curated euphony named, Terminator, a perfect blend of Afro-pop and Amapaino sound for the delightful listening pleasure of anyone who hearkens and vibe to it.

This Magic Sticks-produced record follow-up after his catalogue, Peace Be Unto You (PBUY), which has amassed more than 5 Million Youtube views, put together by a famed cinematographer known as TG Omori, who did a wonderful placement on the visual, uncovered to the audience in the year 2022.

Ahmed Ololade Asake known as Asake is one of the new school artists dominating the Nigerian music scene lately. The young dude signed to YBNL Nation understands the music business and mastered his own craft to perfection. His contribution to Fireboy DML's record, 'Bandana', was so top-notch.

Nevertheless, this latest creative output called, Terminator will be part of Asake's forthcoming body of work called, Mr. Money With The Vibe, which is scheduled to be released on the 2nd of September 2022. Have you been keeping yourself entertained with Asake's euphonies...? Here we have another brilliant entry from him called, Terminator, that will definitely make your day.