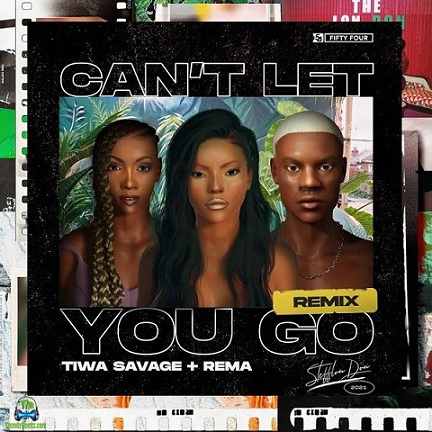 
Talented British singer and rapper, Stefflon Don outdoors the remix of his afrobeat single track ''Can't Let You Go'' as he enlisted Nigerian Trending stars, Mavin Records act, Rema and The African Bad Gal, Tiwa Savage on this jam, which will surely become huge airplay both local and international.

It's a great and lovely jam, as Stefflon Don links up with this Nigerian songstress and songster, Tiwa Savage and Rema, as they performed well on their part giving their best on this jam.

Rema, has been a good artiste since he rose to fame, making hits back to back, also taking African music and Nigerian music to the whole world collaborating with foreign stars, he was seen in Manny Norte song ''4am'' on which Manny Norte featured 6LACK, Rema and Tion Wayne on this sound, which trended all over Nigerian and other countries.
This also comes up with a music video which reached around 2 Million views on Youtube.

Stefflon Don real name Stephanie Victoria Allen is a British rapper, singer and songwriter, who breakthrough with her hit ''Hurtin' Me'' featuring French Montana, which was a massive hit and has associated with the likes of Nigerian and American top artiste Sean Paul, Burna Boy, French Montana and many more.
She also won Best New Artiste at NNE Awards (2018). Best Female artiste at MOBO Awards (2017), and many other nominations.