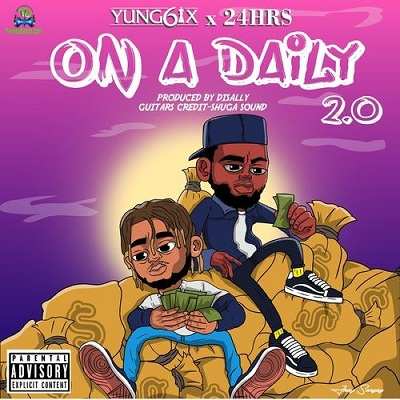 
Yung6ix drops a new masterpiece soundtrack tagged ''On A Daily 2.0'' as he features American musician, 24Hrs on this jam.


Promising Nigerian prolific rapper, Yung6ix smash a new hit on which captioned this one ''On A Daily 2.0'' featuring American singer, songwriter, rapper and composer known as 24Hrs, on this impressive soundtrack, with good lyrics and nice vocals from these two talented artists. Released in the year 2021.

With Disally on the seat of production, This song ''On A Daily 2.0'' by Yung6ix comes from his 2020 album ''Introduction to trapfro'' which consist of 11 solid tracks featuring Nigerian Superstars and rave of the moment namely Peruzzi, Dammy Krane, Erigga, Sinzu and many more, who lead to the successful released of the album.

Still ''Introduction to trapfro'' Album by Yung6ix trending, Yung6ix decides to bring out this one tagged ''On A Daily 2.0'' as he joins hands with American rapper, 24Hrs, who murdered this beat by dropping his amazing style of rap music.

''On A Daily 2.0'' by Yung6ix was produced by Disally, and guitar credit to Shuga Sound. Stream and download below.

Yung6ix - What If Video