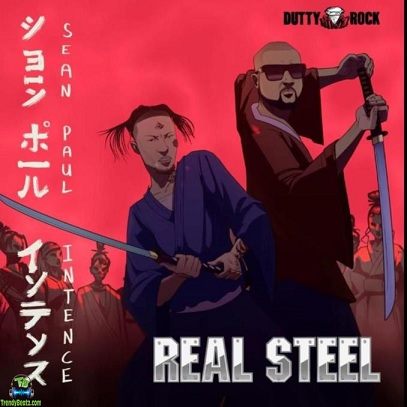 Jamaican Superstar, Sean Paul drops a new mid-tempo sound hit tagged ''Real Steel'' as he teams up with Intence on this one.

Popular Jamaican trending artist, Sean Paul has dropped a new hit crafted ''Real Steel'' as teams up with Jamaican trending act, Intence on this sound, which is a potential hit jam, highly Anticipated.. Released in the year 2021.

Haven't heard any song from, Sean Paul this new year 2021, Sean Paul made up his mind to break the silence as he taps his fellow Jamaican artist, Intence on this beautiful sound ''Real Steel'' as these two talented act surely did wonderful well on this jam.
Sean Paul, spicing up this song with his reggae sounds, as usual.

Furthermore, This artist Sean Paul has been making good hits, lyrics and nice vocals, who has associated with the likes of Jamaican, American and many other countries artiste. Sean Paul was known well after he was featured on Clean Bandit song ''Rockabye'' which was a massive hit, still making waves till now.

In addition, this song ''Real Steel'' by Sean Paul and Intence was taking from Sean Paul forthcoming album tagged ''Live and Living'' which will soon be out anytime from now.

While waiting for the debut studio project lets enjoy ourselves with this one ''Real Steel''.