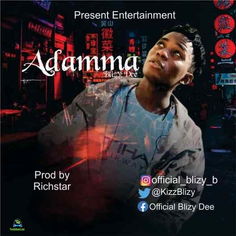 
Gifted singer, Blizy Dee unlocks this track Adamma for the listening pleasure of everyone and many music lovers are already loving and vibing to this hit joint.
The track Adamma was released in 2021 by creative and skillful Afrobeats singer Blizy Dee, and the production of this monster hit was handled by Richstar while the Mix and mastering was done by Life G.

Blizy Dee is a fast rising singer whose real name is David Olajide . The Nigerian talented entertainer is from Ondo State in Nigeria. He is one of the upcoming singers to look out for this year.

Adamma is a follow up of his previously released hit singles featuring Gidi Randy tagged Baby, and The One