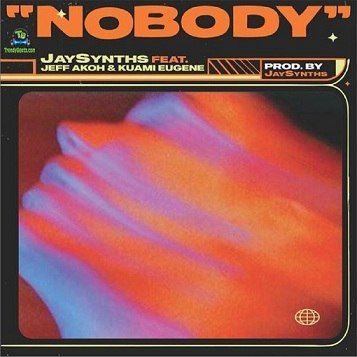 
Highly-Gifted Nigerian music producer, Jaysynths released a new song christened ''Nobody'' on which he featured two talented musical artists, Jeff Akoh and Kuami Eugene on this one. Released in the year 2021.
This awesome song ''Nobody'' was produced by Jaysynths on this amazing instrument.

This song ''Nobody'' by Jaysynths stands as his first official song ever been in the music industry. Just this year 2021, Jaysynths made up his mind to drop a song, on which he joins hands with Nigerian talented artist, Jeff Akoh and Ghanaian trending hit-maker, Kuami Eugene, Lynx Entertainment Signee on this fantastic sound.

These two Nigerian and Ghanaian artists, Jeff Akoh and Kuami Eugene, did perfectly well on this song, dropping good lyrics and nice vocals, which will be generally accepted by their music fans.

Every music listener, in Nigeria, knows that Jaysynths is one of the Nigerian talented music producers, who never disappoints, whenever it comes to producing beats, he always gives his best on every song made by him.

Just recently, Jaysynths comes with his first song, ever been in the industry titled ''Nobody'' featuring Jeff Akoh and Kuami Eugene. Let's give Jaysynths a listening ear to his first sound on this one.


Share Jaysynths - Nobody ft Jeff Akoh, Kuami Eugene Mp3 with others on;