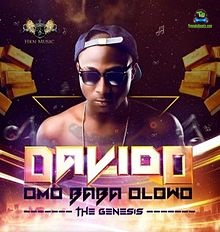 Track Title: Dollars In the Bank


Davido links up with Kayswitch to unlock this impressive sound track tagged Dollars in The Bank.


Heavy weight Nigerian singer Davido partners with Kayswitch to released the track Dollars In The Bank, a record off his debut studio project titled Omo Baba Olowo.
The award wining singer, Davido alongside Kayswitch presents this record for the listening pleasures of all their fans. This track appears as the ninth record off this exciting album.

David Adeleke fondly called Davido by his fans is one of Nigeria's biggest music export. This album Omo Baba Olowo is his debut project that he used to showcase his God given talent to the whole world.

On this record Dollars In The Bank, Davido taps famous hit maker Shizzi for the production of this great song. Kayswitch who was also featured on this project really came through.


Share Davido - Dollars In the Bank ft Kayswitch Mp3 with others on;