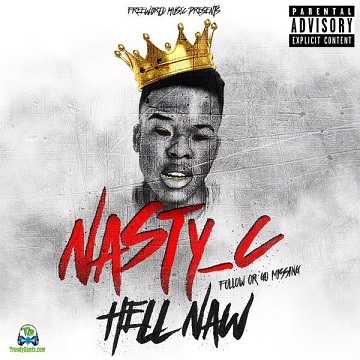 
Award-Winning and Talented rapper and singer, Nasty C has dropped a debut soundtrack tagged "Hell Naw (Hell Now)". This song came out worldwide in the year, 2016 which was a huge trend in all the African countries and International. This song was produced by Nasty C himself.

Nasty C has been one of the most decorated artists in the Industry. He released this new song so special to make his fan feel excited this year.

This debut song "Hell Naw" appeared to be the lead single from his debut album, "Bad Hair Album" which later after topped at number 1 on The Beat 99.9 FM African Top 10 chart. This song trended so massively that it is being rated by the fan as one of his best hit song ever released.

Therefore, this hit soundtrack is a song for you not to miss at all. Just stream and download the song below.