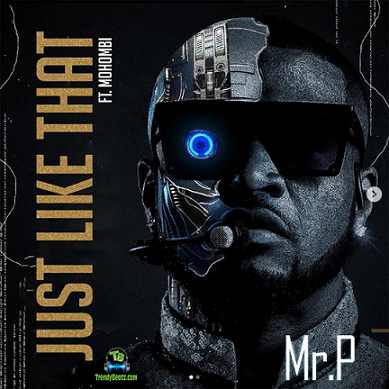 The Nigerian Legendary R&B singer Mr P has released a new debut song titled "Just Like That" featuring Mohombi, in the year, 2021 off his debut studio album "The Prodigal Album". The production credits go to Mr P himself.


Finally it is has been revealed out. A new debut studio song titled "Just Like That" from the Nigerian singer, Mr P featuring Mohombi, recently about a few minutes now which is now making a huge trend in social media. This another beautiful song about love which Mr P drops in the chorus saying "Can We Go Back To The Days When We Were Crazy In love".

This a new song that fans have been waiting for for a long time now which also reminds us about the P Square old time. Mr P has revealed out that he has a new project "The Prodigal Album" which is now about 70% on the way to our doorsteps, Now he has landed with a new debut hit off the album to thrill his fans out there with the helping hand of Mohombi.

This one appeared to be the 5th track off this amazing album that also features some Nigerian popular artists like, Tiwa Savage, Wande Coal, Singah and many more.

Peter Okoye know professionally as Mr p has been one of the Nigerian most talented, Inspired and award-winning artists who has been known worldwide as the best R&B singer, dancer and most decorated artist that has been dropping catchy songs for his fans out there.

This long-awaited debut song "Just Like That" is a song that will make you feel satisfied this time around. Mr P is an artist you can never let go of any of his songs, Just download the song below and make fun out of it.