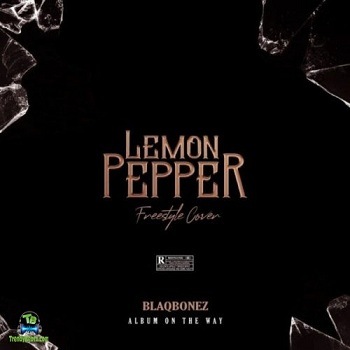 
The Nigerian top singer and rapper, Blaqbonez has dropped the Freestyle cover of the hit song "Lemon Pepper (Freestyle Cover)" just recently in the year, 2021.


Blaqbonez the Nigeria top-notch has delivered out a new freestyle of his debut song tagged "Lemon Pepper (Freestyle Cover)". He released this new one just a few hours now as a welcoming debut freestyle off his upcoming album.

Blaqbonez has a new project album coming up now which he entitled "Sex Over Love" which serves as his forthcoming album that we know surely will it be a huge trend in Nigeria and Africa.

With so much anticipation, we can't wait to hear from this upcoming album bringing out by our favourite artist, Blaqbonez.

He is one of the Nigerian artists to be watching out this year, He has already dropped the debut song "BBC" recently in which he later dropped the remix with Tiwa Savage (The African Bad Gyal). Now he appeared again with a freestyle which is a road to his upcoming project.

Just stream and download the song below via TrendyBeatz.com


Share Blaqbonez - Lemon Pepper (Freestyle Cover) Mp3 with others on;