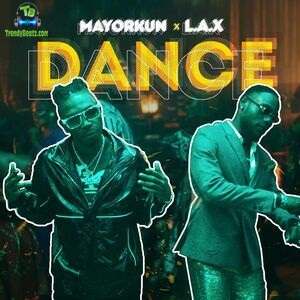 
Grab this jam, which Starboy Entertainment act, LAX was featured in, called ''Dance'' a track owned by Famous Nigerian hit-maker, Mayorkun, the Mayor of Lagos, which the fans are now loving and vibing with this sound.

Mayor of Lagos, dropped this song, after his last 2020 hit song ''Your Body'' which was massive airplay, enjoyed by his music fans, still buzzing around and busting speakers.

The song comes up with a music video, which has amassed more than 1 Million views on Youtube, directed by Nigerian trending videographer, Dammy Twitch, as he never fails on any of his production.

This was a great collaboration this time, come to think of it. DMW hitmaker, Mayorkun linking up with Starboy Records frontman, LAX to give us a banger, exploring the new sound ''Amapiano''.

Coming to LAX side, we haven't heard any single song from him this new year 2021, though he dropped the visual of his song ''Sempe'' taken from his debut album ''Zaza'' released in the year 2020, which embeds 12 tracks, featuring Nigerian trending artist namely, Tekno, Peruzzi, Simi, Tiwa Savage and many other talented artists.

In addition, this song was for the new Oppo Mobile, Reno5F smartphone.


Share LAX - Dance ft Mayorkun Mp3 with others on;