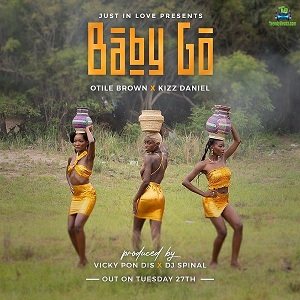 Award-winning Kenyan songster, Otile Brown unlocks a new lovely tune captioned '''Baby Go'' as he enlisted Nigerian Top and Trending artist, Vado the Great, Kizz Daniel on this impressive tune.
Baby Go, by Otile Brown comes through after he gave us ''Valentine'' during the love season. Also, he was recently featured on ''Kolo'' by Nadia Mukami, a Kenyan female singer.

Otile Brown who is known well for his God-given talent decides to join hands with Kizz Daniel, as they smashed this hit tagged ''Baby Go'' which is a potential hit jam.
Vado the Great, Kizz Daniel, added special touch, to this tune, which will be generally accepted by his music fans out there.