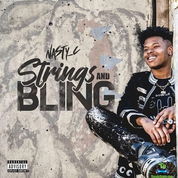 Gifted Rapper, Nasty C drops the record titled King alongside ASAP Ferg, one of hip hop hottest rapper for the entertainment of all their fans world wide.
The track King is one of the smash hit tune that appears on the Nasty C second studio album tagged Strings And Bling released in the year 2018.