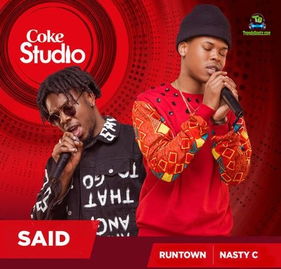 Mad Over You Crooner "Runtown" and South Africa'susic legend "Nasty C" premiers this dope joint tagged "Said" in the year 2017.


Runtown and Nasty joins hands together to deliver this incredible sound track tagged "Said" off their first ever Coke Studio Africa sessions in the year 2017.
This dope Joint "Said" presented by Nasty C alongside Runtown talks about their journey to Success, the challenges they encounter on their way and how they now made it to the top.

Shout out to Coke Studio Africa for bringing this two Africa's music legends Runtown and Nasty C together to unlocks this evergreen sound track.


Share Nasty C - Said ft Runtown Mp3 with others on;