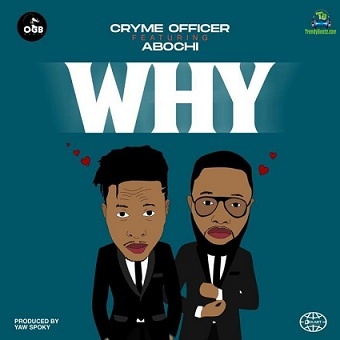 
Multi-Talented Ghanaian trending rapper and songwriter, Cryme Officer, unleashed a new masterpiece soundtrack named "Why" on which he featured Abochi, on this tune.
Cryme Officer, came through with this song, after his previous sound ''Secrets" which is still basking around.

As "Secrets" keeps making massive airplay, Cryme Officer, outdoors this banging tune named "Why" on which he featured Abochi ''Bestie" hit-maker on this one, which is a potential hit jam, to enjoy and vibe with.
This song was produced by Yaw Spoky.


Share Cryme Officer - Why ft Abochi Mp3 with others on;