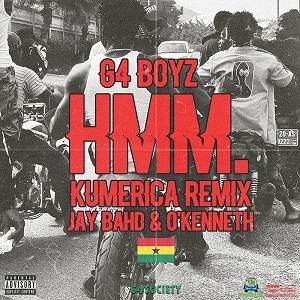 
Multi-Talented New York, musical duo, G4 Boyz, delivers another remix to their trending song named "Hmm (Kumerica Remix)" on which they featured Jay Bahd & O’Kenneth.
This song, comes through after] they dropped "Hmm (Naija Remix)" with Blqabonez and Bad Boy Timz, which is now making massive airplay in Nigerian and many other African counties.

As the song, keeps making waves. G4 Boyz, decides to join forces with Ghanaian young and talented artists Jay Bahd & O’Kenneth, on this number named " Hmm Kumerica (Remix)".
Jay Bahd & O’Kenneth, performed well on this song, briningg another vibe, which is a potential hit jam. Stream and download below.