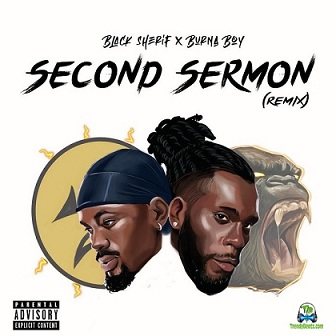 And here we have the song "Second Sermon (Remix)" by Burna Boy and Black Sherif.


This day, we have the anticipated song "Second Sermon (Remix)" which featured Burna Boy. It was officially owned by Black Sherif, the Ghanaian singer who is out to turn up the industry his entertainment in general. Second Sermon (Remix) was released a new few hours now which has been making a huge trend in Ghana, Nigerian and other countries.

Black Sherif released the first sermon which is still buzzing in Ghana and across the country. The song caught the attention of the Grammy award-winning singer, Burna Boy, and as expected to have the song remix, both singers surprises the fans with the remix which has been going viral on social media.

The song is now becoming the new one keeping others on mute. It's dominating the mainstream of not only Ghana but Africa in general. The song is also gifted with the regular trap vibes of Black Sherif accompanied by Burna Boy sensational vocal that makes it a hit one.

Son produced by Stallion and Samsney.