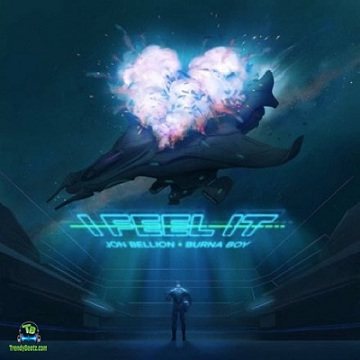 
Multi-Talented American singer and songwriter, Jon Bellion links up with Burna Boy on this record called "I Feel It (New Song)", Released in the year 2021.


Multifaceted American singer, songwriter and performer, Jon Bellion, unfolds this amazing record christened "I Feel It (New Song)" in which he features Grammy Award winner, Burna Boy, who adds his fantastic vocal to blend the impressive house record, which is a potential hit jam highly anticipated...
I Feel It (New Song), is a lovely tune, spiced up with infectious lyrics, blooming hooks and lively verses. Jon Bellion and Burna Boy, really came through on this record, which their music fans will be pleased to hear.

Jonathan David Bellion, professionally known as Jon Bellion, is an American singer, songwriter, and record producer known well for his song "All Time Low" a record off his album "The Human Condition" released in the year 2016. This American singer has released numerous records since he rose to stardom. Some of his songs are: "Fashion", "The Good In Me", "Hand of God" and many more credited to him.

This year 2021, Jon Bellion joins forces with Nigerian heavyweight singer, Burna Boy, on the record called "I Feel It (New Song)", which will uplift the spirits across whole nation.


Share Jon Bellion - I Feel It (New Song) ft Burna Boy Mp3 with others on;