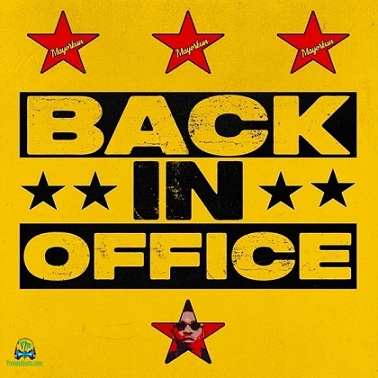 Track Title: Back In Office

Album Name: Back In Office Album

The Nigerian Afrobeat singer, Mayorkun has unveiled a new song "Back In Office" and fans are now enjoying it.

Have you been waiting for a drop from Mayorkun?... Here is a new song from him titled "Back In Office" which has started going viral on social media and giving pleasure to the fans out there. He made this song worldwide in the year, 2021 which has started accumulating lots of streams on the digital streaming platforms. Mayor is a talented one and we can't stop enjoying his melodies.

Since 2016, the singer has been active and due to his consistency, he's now celebrated in Nigeria and internationally and his songs are played so massively out there. Can't forget his 2017 hit single "Mama" which has gained 28,556,423 million views on the Youtube channel and since then the singer still proves his talent in each of his drops.

Following his previous release "Let Me Know" which was released a few weeks ago, the singer can't let the buzz of his trendings fade away but delivered a new song "Back In Office" where he praises God for all His blessings.
The song is an outstanding one with a special production where Mayor perfomed wonderfully and we would like to have another record from him.


Listen to Mayorkun - Back In Office Mp3 Here!

Share Mayorkun - Back In Office Mp3 with others on;