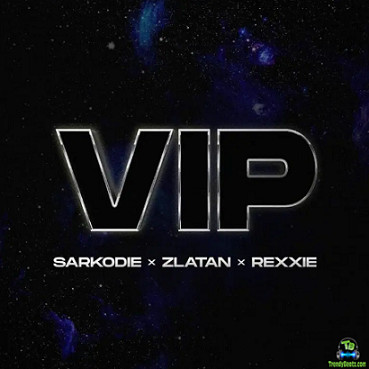 
What a great collaboration, as Sarkodie, teams up with Zlatan and Rexxie, on this studio number called "VIP".


Enjoying a hugely prosperous year following the release of a vibrant body of work No Pressure Sarkodie, links up with Nigerian hitmaker, Zlatan alongside Rexxie, on this number called "VIP". The song is a great soundtrack, one can not afford to miss, which will surely get you up on your feet ready to sweat it out on the dance floor.

The No.1 Ghanaian music crooner, Sarkodie, teaming up with Zlatan and Rexxie, was an excellent one. They all performed extremely well on this record, which will surely take over Ghana and Nigeria, music mainstream, in no distant time. Rexxie, doing what his best know for in the production department.

Michael Owusu Addo, widely known as Sarkodie is one of the most influential artists in Ghana and also one of the successful rappers in Africa. Sarkodie has been in the game, over a decade now, consistent and always coming out extraordinary. His contribution to Ghana Music Industry has earned him, several achievements. He often raps in his native language Twi.

Finally, this month of October, Sarkodie, hit th studio, with this one called, "VIP", featuring Zlatan and Rexxie. Trust me, Sarkodie never disappoints when it comes to Hip Hop sounds. Zlatan also added a special touch to this record making it more interesting. Enjoy this Ghana-Nigeria banger, "VIP'.


Share Sarkodie - VIP ft Zlatan, Rexxie Mp3 with others on;

Demarco ft. Sarkodie - For You