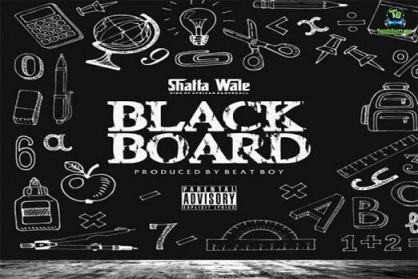 Ghanaian top and trending artist, Shatta Wale smashed another one tagged ‘’Blackboard(Samini Diss)’’ which is nowhere for your listening pleasure.


Shatta Movement Empire, Shatta Wale unleashed a new soundtrack tagged ‘’Blackboard (Samini Diss)’’ as one of his 2021 songs, to entertain his music fans and lovers of good music in general, which is a lovely banger, with good lyrics and nice vocals, from Shatta Wale.

Besides, Shatta Wale appeared on Phrimpong last hit tagged ‘’Ohia’’ which is buzzing around Ghana, South African, Nigerian and many other African countries, Shatta Wale also did justice to this song ‘’Ohia’’ as he never disappoints his music fans, but always amaze them with something new.

Just recently, Shatta Wale replied back with this one tagged ‘’Blackboard (Samini Diss)’’ which nowhere for your listening pleasure.


Share Shatta Wale - Blackboard (Samini Diss) Mp3 with others on;