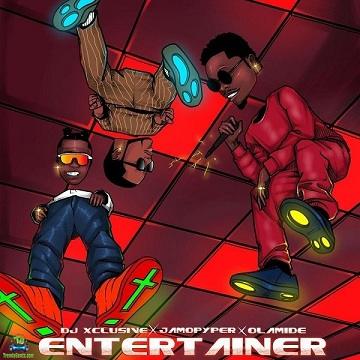 Grab this marvellous record named "Entertainer" performed by DJ Xclusive, in collaboration with Olamide and Jamopyper.

Here comes a record, featuring versatile Nigerian artiste Olamide, alongside Jamopyper, tagged "Entertainer". The record is presented by Nigerian skilled disc jockey, DJ Xclusive, released in the year 2021, with boost production from Nigerian sound engineer and music producer, Eskeez.
DJ Xclusive, released this record after he gave us "Wick John", a record, he uses to open his music account this year 2021. This artist is one of the respected disc jockeys in Nigeria. He has associated with the likes of Asake, Lil Kesh, Timaya, just to mention a few. In the year 2010, he won Best DJ, at the Nigeria Entertainment Awards, held in the United States.

This month of September 2021, DJ Xclusive dishes out a new record called "Entertainer" which features Olamide and Jamopyper. The record is a great and awesome piece of music, that will surely keep you excited. Olamide delivered his undying flows and massive punchlines, on this number. Jamopyper also did well.
Listen up and download the record below.