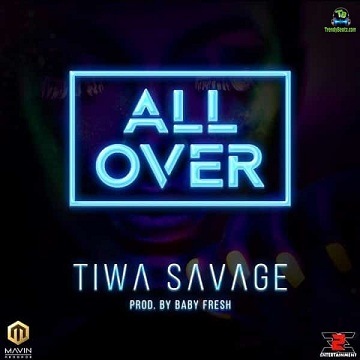 Track Title: All Over

We present this catchy soundtrack from Nigerian female singer, African Bad girl (Tiwa Savage) on this one dubbed ''All Over'' released in the year 2017.


Nigerian Afro-Pop queen, Tiwa Savage drops this sweet melody tagged ''All Over'' a lovely track, with infectious lyrics, vocal and lively verses, which you can't hesitate to download after streaming it below.
All Over, by Tiwa Savage, got its production credit of Nigerian finest producer, BabyFresh, on this solid instrument.

This jam was released under Mavin Records, Tiwa Savage really performed well on this sound, with a nice instrumental from BabyFresh.
All Over, also comes up with a music video, which was amassed more than 43 Million Youtube views, since its release, which the video was directed by talented cinematographer, Patrick Elis.

The song has been fans favourite since its release.


Listen to Tiwa Savage - All Over Mp3 Here!

Share Tiwa Savage - All Over Mp3 with others on;